On Tuesday, 6th January 2015 students and staff at Coláiste Mhuire Johnstown were treated to an inspiring talk by Holocaust Survivor & author Tomi Reichental.  Tomi visits two schools every week and is booked up until Autumn 2015 so we were fortunate in Coláiste Mhuire to procure his services so early this year.  Tomi will be in even greater demand since being named RTE International Person of the Year 2015 just before Christmas 2014.

Born in 1935 in Slovakia, Tomi witnessed first-hand the horrors of life in a concentration camp, when he was deported with his family to the infamous Bergen Belsen camp aged just nine.  Tomi’s grandmother, Rosali died in Bergen Belsen and he watched as her body was dragged from a hut and thrown among a pile of corpses.  For eight months, Tomi watched as thousands perished until he was liberated from the camp in 1945 along with his mother, brother, cousin and aunt, and was reunited with his father.  Tomi has lived in Dublin since 1959, marrying, raising three sons and running a successful business.  For almost 60 years after his release from Belsen, he was unable to talk about his experiences but now dedicates himself to highlighting the impact of the Holocaust.

As one of the last remaining witnesses of these war crimes, Tomi is committed to highlighting the impact of the Holocaust.  For his dedication to peace, truth, reconciliation, to tolerance and forgiveness and to the rejection of all forms of racism and discrimination Tomi recieved the International Person of the Year 2015 just before Christmas. 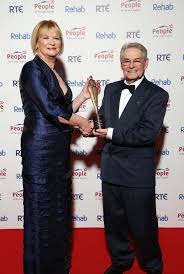 A Teacher’s Guide has been developed based on Tomi’s story so that others may teach children about the Holocaust.  Students all over Ireland have heard Tomi’s story and in January 2008 RTÉ broadcast the film I Was a Boy in Belsen, bringing his story to an even wider audience.  In October 2011, Tomi published his first book by the same title and he is now writing his second book at age 79.  He kindly signed copies of his book for many students & staff.

The students and staff at Coláiste Mhuire would like to thank Tomi for giving of his time and wish him continued health and success in his humanitarian work.  Indeed, Tomi has trips to Liverpool and South Africa this Spring shy of his 80th birthday!  Our thanks also to Mr Colin Madden (History & English Department) for organising this talk.

Further information on Tomi and the Holocaust Education Trust can be found on www.hetireland.org