The two teams returned to Heywood for the second Leinster Final in a week, this time it was the Junior Camogie teams that battled for the Junior C Leinster title. This game was played in excellent conditions, despite the weather been changeable earlier in the morning. Orla Kilmartin opened the scoring for the Offaly outfit in the 5th minute with a point from a free, from the resultant puck out, the Johnstown girls were on the attack, a long delivery from Orla Brophy in the middle of the field was finished to the net by Louise Bergin. This was a great settler for the CMJ team, the game was tough and physical, it was exceedingly difficult to breach either defense. Orla Kilmartin scored an excellent point from play to reduce the deficit to the minimum, immediately Áine Sharkey replied with a point for Coláiste Mhuire to restore the two-point lead. Michele Killeen scored a point from a free to extend the lead, Chloe Hollywood then scored a point from play for Kilcormac. With scores difficult to get, there was a period of excellent defending from both teams with no scores conceded. Orla Kilmartin was causing problems for the Johnstown girls, and she scored the next two points, one from a free and the other from play.  In the twenty-eight-minute, Johnstown were awarded a penalty after Niamh Queally was brought down at the end of an excellent run, Niamh picked herself up and dispatched the sliotar to the back of the net. Another pointed free from Michelle Killeen for Johnstown and a minor score for Kilcormac by Karla Mannion left the score at half-time CMJ Johnstown 2-03, CNC KIlcormac 0-06. The second half began with a fabulous point from Áine Sharkey, her second of the game. Then came a decisive moment when Niamh Queally scored her second goal to edge the Coláiste Mhuire girls seven points in front. Orla KIlmartin scored her fifth point from a free, in the eight-minute of the half, this would be their last score of the game. The only scores for the rest of the game were points from play by Catherine Kirby and Áine Sharkey, scored her third point from play. As the game approached injury time, Kilcormac were awarded a penalty, when it came back off the crossbar, it was clear it was going to be Coláiste Mhuire’s day. All the Coláiste Mhuire backs played extremely well throughout the game, with Anna Cleere at full back and Caoimhe Hickey at centre back dominating, Kilcormac were struggling to score, they were ably assisted by Orla Holland, Emma Daly, Abbie O Sullivan and Kayla Dwyer who gave an outstanding performance at half back. Orla Brophy and Mary Cussen got through a tremendous amount of work at midfield, setting up plenty of attacks during the game. In the half forward line Michelle Killeen gave a player of the match performance, Áine Sharkey scored three points from play and Louise Bergin scored a goal, a brilliant return from CMJ’s first line of attack. In the full forward line Catherine Kirby got through an immense amount of work, Aoife Murphy worked hard throughout, and Niamh Queally was a constant threat for the Offaly defense, scoring two goals.   Scorers: Johnstown, Niamh Queally 2-00, Louise Bergin 1-00, Áine Sharkey 0-03, Michelle Killeen 0-02, Catherine KIrby 0-01, Kilcormac, Orla Kilmartin 0-05, Chloe Hollywood 0-01, Karla Mannion 0-01.  Teams. CMJ Johnstown, Mia Henderson, Orla Holland, Anna Cleere (Capt), Emma Daly, Abbie O Sullivan, Caoimhe Hickey, Kayla Dwyer, Orla Brophy, Mary Cussen, Áine Sharkey, Michelle Killeen, Louise Bergin, Catherine Kirby, Aoife Murphy, Niamh Queally, SUBS: Áine Holohan, Rachel Dollard, Lorraine Bergin, Aimee Lennon, Paige Boyhan, Eadaoin Whyte, Lauren Kenny, Abigail Whitty, Kaitlyn O Connor, Eva Dunphy, Tara Kenny Landers, Isabelle Delaney, Grace Cleere, Katie Mai Broderick, Saoirse Hickey, Grace Doran, Sarah Hickey, Emma O Connor, Áine Carey, Kate Mahon. 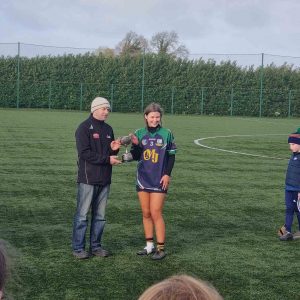 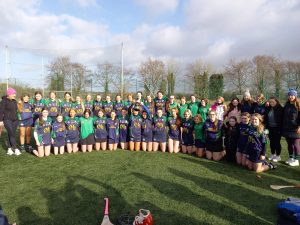 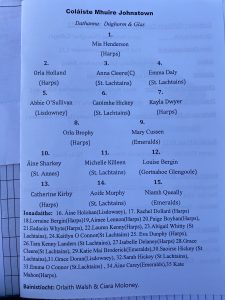 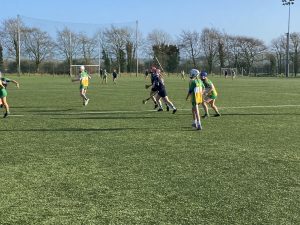 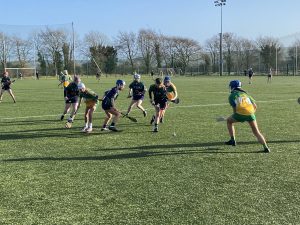 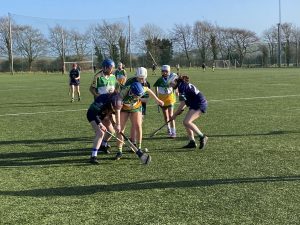 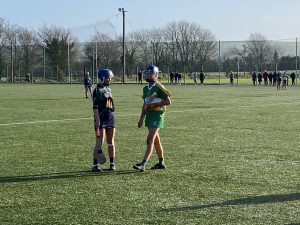 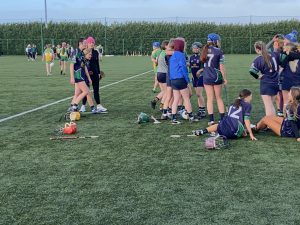 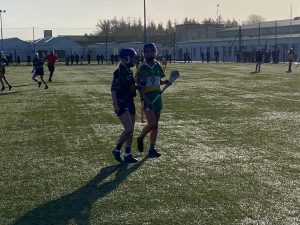 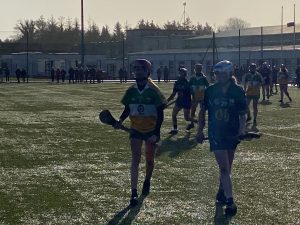 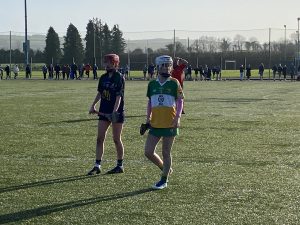 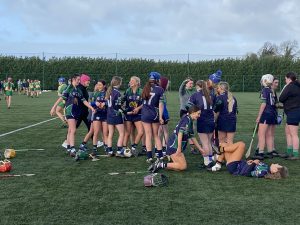 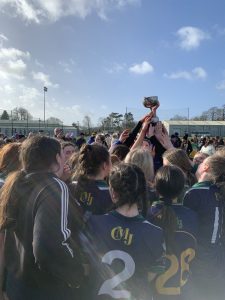 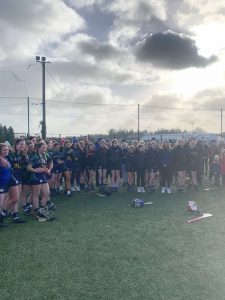