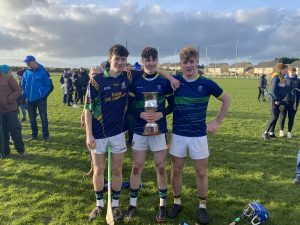 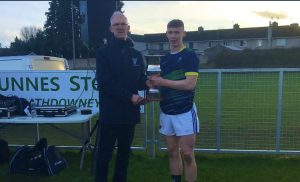 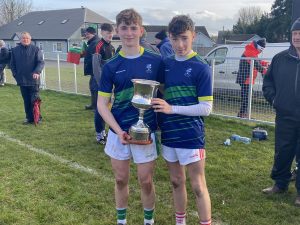 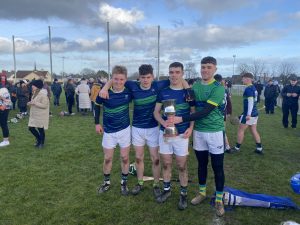 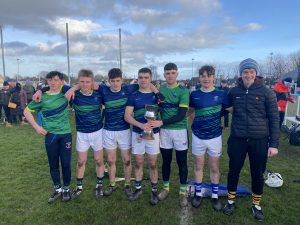 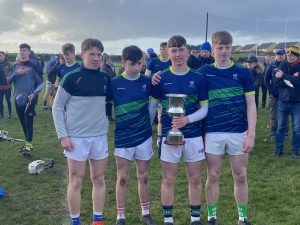 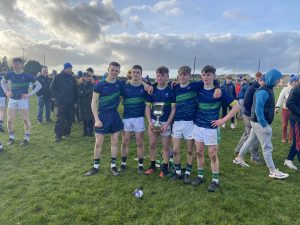 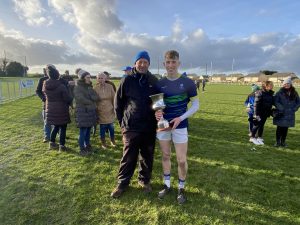 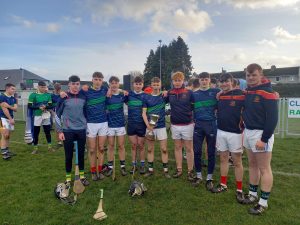 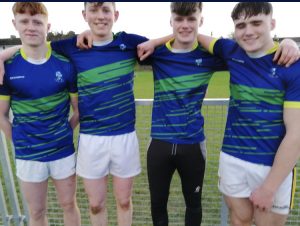 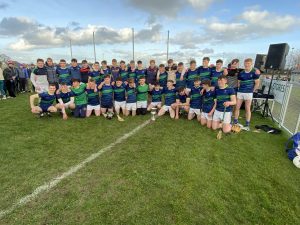 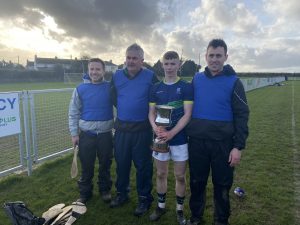 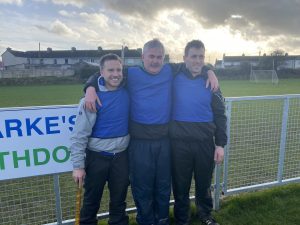 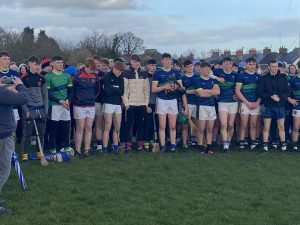 Colaiste Mhuire Johnstown were crowned Leinster champions after an excellent game in Rathdowney against St. Brendans from Birr.  Enroute to the final the Johnstown team had already beaten several strong teams and the Offaly team proved to be a very difficult opponent.  There was a very strong wind, and it was evident that it was going to be a game of two halves,  Colaiste Mhuire started with the wind and opened the scoring with an excellent point from Damien Corbett.  Shortly after this a long delivery from defence by Cody Comerford resulted in Tomas Sharkey putting the sliotar past Liam Hoare in goals for Birr, to ensure the Johnstown team got the start they needed.   Helped by the elements,  Colaiste Mhuire created several attacks, and with their backs dominating the St. Brendans forwards, notably Darragh McCormack, Padraig O’Grady and Cody Comerford, they were the team most likely to score. The standard of play was very good and sometimes frantic with no quarter asked or given, three more points were added by Charlie Brennan, Tomas Sharkey and Damien Corbett before St. Brendans registered a score, a pointed free from Lochlann Quinn.  Two more points from Evan Landers and another free from Damien Corbett left the score after 11 minutes 1-06 to 0-01 in favour of Colaiste Mhuire.  The next two scores of the game were by Lochlann Quinn – a pointed free and an excellent score from play.  Damien Corbett with a monstrous free from his own half was followed by another pointed free by Lochlann Quinn to leave 6 points between the teams.  Cian Nolan then scored a point for Birr to reduce the deficit, two more points from Johnstown stretched their lead again from Damien Corbett (65) and Darragh Queally with a well worked point from play.  The last score of the half was another pointed free from Lochlann Quinn to leave the Offaly team trailing by 6 points at half time. Aided by a strong wind in the second half it was essential for St Brendan’s to get a good start, luckily for Colaiste Mhuire Damien Corbett opened the scoring with another pointed free, this was followed by a pointed free from Lochlann Quinn for Birr. The next 15 minutes of the game was dominated by St. Brendans and they reduced Colaiste Mhuire’s lead to two points, three pointed frees from Lochlann Quinn and points from play by Adam Landy, Andrew Coakley and Luke Carey.  With 10 minutes remaining in the game the Offaly team looked the most likely winners; they were asking some serious questions about the Johnstown defence. At this stage in the game Tomas Sharkey was operating in defense and picked up several key disposals, Gearoid Phelan thundered into the game and Cody Comerford continued to play a captain’s role organising his team. Alex Burke scored an excellent point from play to extend the lead and Damien Corbett scored another point, his ninth of the game, to stretch the lead further. St Brendan’s replied with three points from placed balls by Lochlann Quinn, including a sideline cut from 50 yards, this left one point between the teams. The last score of the game was another pointed free from Damien Corbett in injury time. Colaiste Mhuire will now face the Connacht champions in the All-Ireland semifinal. Well done to all the panel and their management team of Dermot Maher, Brian Guilfoyle and Fergal Challoner.